Photosynthesis is a key process for sustaining life on the planet, as it is the only one capable of processing the sun's energy and converting it into other forms of energy that living organisms, including humans, can use. Since all food is photosynthetic, either as a primary product (fruits, vegetables, grains...) or as a secondary product (meat, milk...), a detailed understanding of photosynthetic processes is essential not only for basic research but also for coping with societal challenges such as ensuring sufficient food for the ever-increasing population of the planet.

Today, photosynthesis is mainly associated with green plants, but simpler organisms such as cyanobacteria can also use sunlight for photosynthesis. And it is these simpler organisms that the published study targets. All photosynthetic organisms have special structures made up of proteins the sole purpose of which is to capture sunlight and pass the energy to other proteins that convert it into chemical energy. These formations, called light-harvesting antennae, are very specific to cyanobacteria, and their detailed structure and mechanism of energy transfer have not been known until now.

The nine-member team, consisting of experts in electron microscopy, structural biology, molecular biology and biophysics, has now succeeded in describing and imaging these cyanobacterial antennae in detail. In addition, detailed knowledge of the structure has made it possible to determine how the trapped energy is transmitted through the entire system. This analysis was conducted by South Bohemian scientists. ‘We were lucky to have a team of experts from different disciplines who complemented each other perfectly. The whole group had the right chemistry,’ says Cheryl Kerfeld, professor of structural bioengineering at Michigan State University, who led the entire project. ‘The result is eleven pages of discoveries and surprises,’ adds Maria Agustina Domínguez-Martín, first author of the publication. The space that the journal Nature has given to this study is extraordinary since most publications in this prestigious journal are about half the size. This only underlines the importance of the work of an international team of scientists.

In addition to understanding the structure and function of the light-harvesting antennae of cyanobacteria, the study contains another important discovery. All photosynthetic organisms face the problem of how to protect their photosynthetic apparatus when there is too much light. In cyanobacteria, it has long been known that a small protein called OCP (Orange Carotenoid Protein) is responsible for regulating energy flow, but until now it was not at all clear how this protein worked. Using electron microscopy, an international team of scientists has succeeded in revealing the sites where this small protein binds to the antenna. This was a crucial first step towards understanding the mechanism of how this protein can affect the flow of energy in a many times larger light-harvesting antenna. Subsequent modelling of the energy transfer, which resulted from the work of the South Bohemian scientists, reliably explained the mechanism of action of this protein. The whole system is optimised so that the OCP protein removes excess energy from the antenna and safely converts it into heat. ‘I am very grateful for the opportunity to work in this great team,’ says Tomáš Polívka, Professor of Biophysics at the Faculty of Science of the University of South Bohemia, who has been working with Cheryl Kerfeld for almost twenty years. 'To see the structure of the whole system was an incredible experience. It was immediately clear that this was a major breakthrough that would allow us to understand in detail how the system works,' he adds.

Understanding the structure and mechanism of light energy capture and regulation in cyanobacteria is a breakthrough discovery, particularly because it is the first time in the history of photosynthetic research that it is possible to 'see' how a photosynthetic organism limits its output in the presence of excessive light. The study is a starting point for further research, including possible applications in the field of artificial photosynthesis, biotechnologies using cyanobacteria for example to extract specific substances or even to reduce unwanted cyanobacteria in water bodies.

Figure 1:
Artistic representation of the light-collecting apparatus of cyanobacteria. The basic components of the antenna are shown in blue and green, the OCP protein is in orange. © Janet Iwasa, University of Utah.

Figure 2:
Detailed structure of a light-collecting cyanobacterial antenna. The OCP protein is shown in red, the other colours indicate the different proteins that make up the antenna. 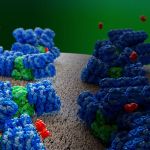 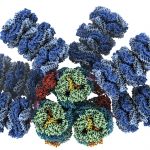