Prof. PhDr. Jitka Radimská, Dr., was awarded the honorary title of Professor Emeritus of the University of South Bohemia 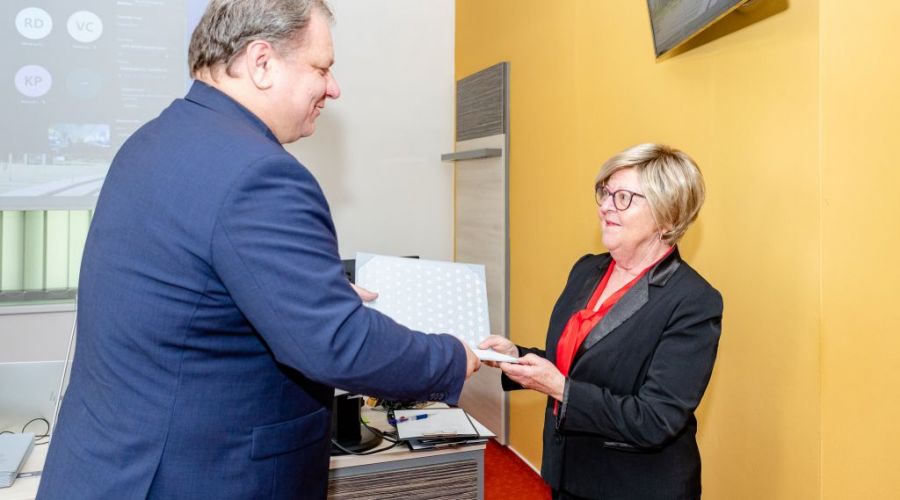 On Wednesday 5 October 2022, at the meeting of the Scientific Board of the University of South Bohemia in České Budějovice, Prof. PhDr. Jitka Radimská, Dr., received her appointment decree from the hands of the Rector, prof. PhDr. Bohumil Jiroušek, Dr. On Monday 3 October 2022, he appointed her Professor Emeritus of the University of South Bohemia.

Professor Jitka Radimská is one of the most important central European experts on the history of French literature. In her research work, she specialises in French literature of the 17th century and its presence, role and reception in the collections of central European aristocratic libraries. She has achieved international recognition in this field. In 2000, she became a member of the Centre de recherche sur l'histoire de l'Europe moderne at the Université Paris IV - Sorbonne in Paris, and in 2003 she founded the tradition of international conferences entitled Towards Research on Chateau, Bourgeois and Ecclesiastical Libraries, which, thanks to their quality, have become one of the main professional meetings of the book-cultural research circle in central Europe. She has recently capitalized on her many years of research work in the castle library in Český Krumlov as the main author of the monograph Les livres et les lectures d'une princesse. Marie Ernestine d'Eggenberg et sa bibliothèque en Bohême au XVIIe siècle, published in 2020 by Honoré Champion in Paris. In the same year, she was awarded the Rector's Award of the University of South Bohemia for a prestigious scientific publication.

No less important is her work in the field of teaching and organisational work, which is integrally connected with South Bohemian Romance Studies and especially with the University of South Bohemia. In 1971–1991 she worked as a secondary school professor at the grammar school in the border town of Český Krumlov, where she managed to maintain the teaching of French at a high-quality standard.

In 1991–1994, she put her teaching experience to good use when she prepared the concept of retraining courses for French teachers at the USB Faculty of Education. From 1994 onwards, as the head of the Department of French Language and Literature, she systematically built up a new university department of Romance studies, gradually shaping it both scientifically and pedagogically, tirelessly establishing new international contacts, and at the same time working on her own scientific qualifications - she completed her doctoral studies at MU Faculty of Arts in Brno in 1996, received her habilitation there in 2000, and became a professor at UP Faculty of Arts in Olomouc in 2009. In this way, she was instrumental in the establishment of the Institute of Romance Studies, which has been operating at the then-newly established USB Faculty of Arts since 2007. It is based on a clearly defined research programme and offers bachelor's, master's and doctoral studies, including the right to habilitation in the field of French, Spanish and Italian philology. Her teaching and organizational activities in the field of Romance philology go far beyond the South Bohemian Region, as evidenced by two important awards: in 1993, she received the French Ordre des Palmes académiques, Knight grade, for her services to education, science and culture; in 2018, she received the FIPLV International Award from the International Federation of Language Teacher Associations for her contribution to the development of foreign language teaching and the dissemination of foreign language culture in her country.

Prof. Radimská has made a significant contribution to the development of Romance Studies at USB through her personal qualities, diligence, vigour, her ability to creatively overcome unfavourable external circumstances, but especially her ability to motivate and inspire younger colleagues to professional work, while at the same time giving them freedom and responsibility for their own professional and managerial activities. Thanks to this genetic input into its DNA, South Bohemian Romance Studies is a department where one can creatively cultivate quality scholarship and pedagogical activities in a friendly and humanly collegial environment.

The proposal for the award of the honorary title Professor Emeritus of USB was discussed by the Scientific Board of the USB Faculty of Arts at its meeting on 28 April 2022.